Could Combi Ovens Speed Up Your Kitchen Production?
Foodservice industry relies heavily on the ability to produce good quality food, fast
9 April, 2021 by

In the modern age of culinary technology, advancements in just how fast we can cook and how we can improve the quality of our cooked food are something that is constantly evolving. For chefs, improving the quality and reducing the duration of the cooking process is incredibly important, especially within modern restaurants, hotels, and other establishments.

The increasingly competitive environment in the foodservice industry relies heavily on the ability to produce good quality food, fast. Customers are becoming less patient and seek that immediate gratification which means being seated fast when they arrive at a restaurant and acquiring their food as soon as possible after ordering - South Africans are no exception to this.

The reasons for customers waiting for a table vary, however, the productivity of the commercial kitchen remains the biggest concern. This is where the industrial combi oven shines; Combi ovens were born by blending together a standard commercial convection oven with a steamer. Culinary experts around the world are now able to cook a variety of different dishes using one simple unit of culinary equipment - the industrial Combi-Oven.

What is a combi oven?
A combi-oven is a three-in-one oven that allows you to cook food using 3 different mediums: steam, hot air, or a combination of both. It is able to replace standard commercial convection and steamer ovens thus increasing the overall efficiency of the kitchen and impacting areas.

The use of the combi oven eliminates the need for several specialist pieces of equipment to cook various different dishes in various different ways, it allows for speed, accuracy, and consistency across all dishes prepared and all while only using one piece of kitchen equipment, thus, saving time, money and space.

The 3 different cooking options in 1 oven

Steam oven cooking uses water which is injected into the combi oven - steam oven cooking is ideal for cooking ingredients that would otherwise need to be boiled or steamed individually. Combi steamers provide a better tasting, nutritional, and filling nourishment than traditional boiling or steamed cooking methods; for example, fish and vegetables often lose nutritional value and decrease in portion size when cooked using these cooking techniques, however, using a combi steamer would keep more nutrition and decrease the portion loss which would be incurred when cooking these ingredients.

Convection cooking specializes in using dry heat to circulate around the oven similar to the oven which you would have at home for domestic use. The standard convection type of cooking is perfect for finishing your favourite kinds of meals including bread, pizzas, and pastries. Convection ovens can take up a lot of space and create an environment that encourages food to burn as well as some baked goods could not form properly.

Achieve the best of both worlds for efficient, high volume cooking; combination cooking uses both steam and convection cooking to ensure that your food is cooked in the most effective manner. Combination cooking is perfect for cooking tougher cuts of meats by using both dry and moist heat cooking.

Does your establishment need a Combi-Oven?

In order to determine if your business needs an industrial combi oven, you have to decide on whether the establishment cooks, bakes, roasts, steams, and or proofs. If your establishment does any of the above-mentioned activities, it is crucial for you to have a combi-oven.

Reducing plant and equipment footprint comes with additional benefits including a reduction in shrinkage, labour, and time savings; the combi oven also allows the business to become more energy efficient with reduced energy use and minimal water consumption.

One of the best commercial combi ovens available is the Mychef combi oven. Manufactured to provide value and not just provide a product, Mychef is every chef’s dream. Offering different products from machines designed specifically for baking, to combi ovens which are able to perform under the most intense situations.

The Mychef combi ovens come in various models and sizes to cater to different establishments; the options range from 4 trays to 10 trays with an increased focus on the number of meals performable using the oven. Depending on the type of establishment which you run, mychef has a solution.
The combi oven is also able to cook faster and more efficiently than traditional conventional ovens and steamers allowing for increased production and performance.

Perfect for all medium to large-sized catering services, restaurants, hotels, and mass caterers. It cooks an amazing 40-110 meals per day and all within the small confined space which the machine takes up. 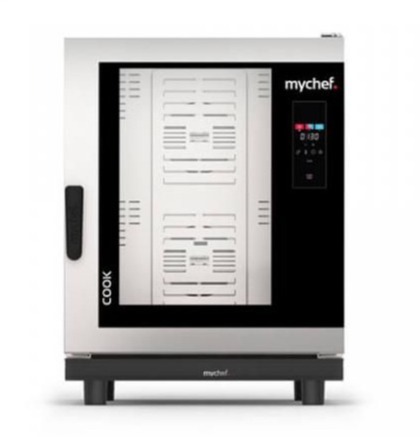 Ideal for the biggest catering option that mychef offers and is capable of producing 80-160 meals per day. Perfect for larger establishments that require a strong catering machine to deliver consistently and provide quality performance.

The Mychef cook combi-style oven has three different modes, convention, combi, and steam. The smartclima plus technology which it possesses automatically adjusts the oven’s humidity level in order to cook perfectly every time. In conjunction with the smartclima plus technology, the Mychef ovens use multisteam, ultraviolet steam and dryout plus systems in order to achieve the most consistent cooking and provide the most succulent dishes.

Therefore, the chef is able to roast, cook, brown, fry, steam, dehydrate and smoke with ease in the cooking process.

The mychef system removes any type of dirt automatically and does so with the most economical cost per wash on the market. The ultraviolet steam technology enables the oven to be 100% bacteria-free and ready for the next bake.

Who needs a Mychef combi oven?

Mychef delivers in all aspects of the cooking process, delivering above expected cooking performance which is suitable for various different business, from hotels and top tier restaurants to smaller coffee shops and stores.

Therefore, it is evident that the combi oven is not only necessary in modern kitchens but required. The prospect of saving money, time, and space within the confines of a busy kitchen should excite any hospitality business.

CONTACT US
Are you looking to speed up your production kitchen?
Please fill in the form and our consultants will get back to you.
in Industry Insights
# combi oven commercial combi oven industrial combi oven mychef combi oven restaurant equipment

We use cookies to provide you a better user experience.